Book Review: “Including the Stranger: Foreigners in the Former Prophets” by David G. Firth 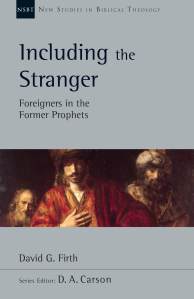 What does the Bible have to say about the “stranger” or the “foreigner”? It’s an expansive question, but one that should inform Christians as they explore modern issues of immigration or refugees. David G. Firth, in Including the Stranger: Foreigners in the Former Prophets, examines texts related to these questions as found in the Former Prophets–Joshua, Judges, 1 & 2 Samuel and 1 & 2 Kings.

Firth’s brief introduction argues that we can use narrative texts for normative values. Reading the text as such requires being attentive to the ways the narrator speaks of the events being narrated, as well as being aware of the ANE context in which the texts were written that comes with different expectations about how to read a text. The reader must also be aware of the assumptions they are bringing to the text and work to see how their own preconceptions can shape the way they interpret the text (3).

The next four chapters go over each of the former prophets in turn, giving an orientation to the reader for the text and then diving into the major questions of foreigners in the text. Joshua is a fascinating place to start here, because most would expect the book’s view of the foreigner to be universally negative, given the conquest narratives therein. However, Firth points out the fact that even upon entering the land, the first kindness was shown by a stranger (Rahab). Going from there, other texts invite larger examination of the notion of the “foreigner” in Joshua, as, for example, a threefold view of foreigner/stranger is found in the text: strangers as neutral/threat/positive. This means, argues Firth, that “Ethnicity itself is not the issue. Rather, the concern is with the possible religious impact of these peoples…” (38). The setting up of cities of refuge helps reinforce this impression.

Judges is one of this reader’s own favorite books of the Bible, and Firth highlighted some aspects of great interest. For example, Shamgar (Judges 3:31) appears to be little more than a sidenote in Judges, and is not, in fact, even listed as having judged! But Firth notes there is more to Shamgar’s story than a single verse may seem to convey. First is the fact that Shamgar’s name is not an Israelite name, being composed of four root letters rather than three. Second, it seems clear Shamgar was not a Yahwist, for the denotation as “Son of Anath” suggests Shamgar followed the Canaanite goddess of the same name. And this, then, could explain why Shamgar is not given the title of “judge,” for the book’s concern with enforcing Yahwist worship leads the author not to give that title to Shamgar. And, moreover, this highlights the significance of Shamgar’s inclusion, for it shows that God has “no problem in using a foreigner to deliver Israel… but he does not grant them positions of leadership” (72). Along with other examples, Shamgar highlights a theme in Judges that God uses foreigners for God’s will as well, and that the Israelites’ own divisions among themselves (Judges 17-21) raises questions of “how Israel can function as the people of God” (92).

Samuel’s central theme related to foreigners, argues Firth, is seeing them as means for assessing Israel. For example, in Samuel, David’s legitimacy as ruler is mediated through an Amalekite rather than an Israelite (113-114). Time and again, foreigners are used as examples to highlight the actions of Israelites, often as a contrast–a foreigner being more true to God/word than an Israelite. The book also shows how encounters with foreigners can lead to integration rather than devastation. Kings deals more with foreigners beyond the borders of Israel, and shows once more that the central value was not about ethnicity or nation, but rather about worship of Yahweh (172).

Firth’s closing words, in a summary and concluding chapter about including the stranger, are words that call readers to action. “In a world that builds walls between communities, or makes the environment hostile for foreigners, this was an example of what the people of God can be: a community that does not discriminate on the basis of ethnicity, because we serve a God who does not do so. This is an ethic that is easily talked down in political discourse, but therefore one that is more important for the church, as the people of God, to live out and show a different way of life” (185-186).

David G. Firth’s exploration of the place of the “stranger” or “foreigner” in Including the Stranger will provide readers with a wealth of resources for learning about the biblical view of those from elsewhere.

2 thoughts on “Book Review: “Including the Stranger: Foreigners in the Former Prophets” by David G. Firth”