“The Very Long Night of Londo Mollari” Babylon 5 and Repentence 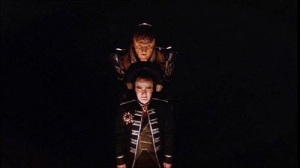 I’ve never watched Babylon 5 before, but I got the whole series on a great sale and have been watching it from the beginning. In this post, please do not SPOIL anything past the episode discussed. There will, of course, be major spoilers for this episode.

Babylon 5 and Repentence: “The Very Long Night of Londo Mollari”

The first, most obvious point to make here is that the episode title is a kind of play on “Dark Night of the Soul,” a mystic work by St. John of the Cross. The work focuses not on general difficulties, which the phrase is sometimes used to denote now. Instead, it focuses on divine union and the purgation, or purification, of the soul. And that is certainly the central theme in “The Very Long Night of Londo Mollari.”

Mollari appears to be poisoned at the beginning but instead has suffered from a heart attack, and in his dream, he is told that his heart is giving out from the weight of his conscience. From there, we are witness to a number of ghostly visitations somewhat like A Christmas Carol by Dickens. Mollari is visited by many characters whom we’ve grown to know and love, but they’re all seeming to push him through his own purgations of the soul.

The primary purgation that must happen for Mollari is, quite simply, accepting responsibility. I think of the concept of responsibility in much deeper ways, having reflected on Dietrich Bonhoeffer’s specific concept of responsibility as taking on the guilt–even of others–for the good of all. And Mollari is the master of evading responsibility. At this point in the series, he has already committed vast, awful acts of horrific scope. Or, at the very least, he has stood by silently observing those acts which he helped orchestrate. Although he’s tried to atone for them in some ways through his actions, he has continually refused to acknowledge the evil he has committed with anything more than a few facial expressions. In this episode, his reckoning has come.

The most powerful way this plays out is when the dream-G’Kar arrives and absolutely skewers Mollari for his complicity, time and again saying “You said nothing” as Mollari protests that he couldn’t have stopped the events. The refrain–“You said nothing” continues as G’Kar then props Mollari up on a whipping post himself so that he can experience psychologically the pain he visitied upon the Narn people. Ultimately, Mollari realizes that he wants to live, and that to live he must accept his guilt–his responsibility. He cries out “I’m sorry!” and in that moment, his eyes open, and he’s back on the operating table, looking at the real G’Kar. He manages to get out the words “I’m sorry.” G’Kar–now the real one, not the one who’d been torturing him in his dreams–acknowledges the apology with the tilt of his head and a slight smile. It may not seem like much, but for these two–who stood on opposite ends of an attempted genocide–it is a huge moment, and one that shows Mollari has grown and indeed learned quite a bit about his life during his “very long night.”

There are other, subtle moments of theological and social commentary mixed throughout the episode. For example, Vir, in the dream, tells Mollari that prophecies are just guesses that turn out to be right, while if they turn out wrong, they are called metaphors. I found this less a jab on the concept of prophecy and rather a cautious warning about how to interpret prophecies. It’s easy today, for example, to devolve the reading of Scripture into headlines-reading attempts at prophecy. But to do that to the text of books like Revelation or Isaiah is to do great damage to the actual thrust of those biblical works, which are often much more a call towards justice and reconciliation than they are about whether attack helicopters would exist in two thousand years (or more) from the time they were written. We would do well to make sure we’re not falling into the “metaphor or guesses” camp and instead reading prophecy in context and trying to discover what it would have meant at the time and why. Prophecy is much more often, as I noted, a call for justice and a crying out for God’s help than it is some kind of secret code in which to find the sequence of future events.

“The Very Long Night of Londo Mollari” is a superb, thoughtful episode of Babylon 5. We, too, need to take responsibility for our actions and do more than say nothing when we see injustice occurring. I hope you’ll join me in discussion of the episode, and make sure to check out my Babylon 5 Hub (on my other website) for more discussion of the series in general.

Babylon 5 Hub– My “Eclectic Theist” site features a number of posts discussing my first watch-through of Babylon 5. Check them out here!