On the Alleged Atheism of Early Christians 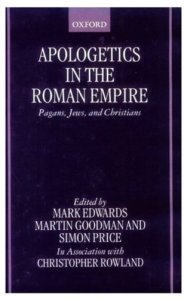 It is interesting to note that modern atheists of the internet-infidel variety share much with Pagan counterparts in the first few centuries after Christ. “How can this be?” one might ask. Well, the charge of atheism against Christians is shared both by the common internet-infidel comment that “We’re all atheists, I [the atheist] just take it one god further” and Pagans in the Roman Empire. Oddly, some atheists have gone so far as to suggest that the Pagan accusation is somehow evidence for their position.

The early Christians, it is true, were accused of being atheists. However, to suggest that this is somehow synonymous with contemporary usage of the term “atheist” is ahistorical and anachronistic. Frances Young notes several facets of the charge of atheism leveled against Christians:

What the charge [of atheism leveled against Christians] really amounted to was an expression of dismay and distaste over the fact that people were abandoning conventional ritual practices… The charge of atheism against Christians focused on their refusal after conversion to continue to participate in traditional religious customs… Religion, embedded in the ethnic cultures, was a matter not of belief but of loyalty. (99, 101, cited below)

The charge against Christians, then, was that they were abandoning the ways of the Romans. They were outsiders, outcasts, and, by extension, atheists. By refusing to worship the gods of Rome, they became targets. The fact that the Christians did this conscientiously–they intentionally abandoned the gods–led to the charge of atheism. It was a charge related not to belief in deity, but rather to rejection of shared societal practice, with a culturally charged impetus for making it.

In fact, others who yet believed in the gods were also charged with atheism. The Epicureans were accused of atheism, despite believing that the gods existed:

It is significant that these ‘atheists’ [Epicureans] did not question the existence of the gods. Rather, they liberated people from religion by suggesting that the blessed immortals were not the slightest bit interested in what goes on among human beings… (ibid, 100)

Thus, when modern atheists continue to perpetuate the claim that “we’re all atheists,” and then move on to argue that Christians should agree with them because, after all, Christians were considered ‘atheists’ by the Romans, it is difficult to take them seriously. The Pagan charge was made for cultural reasons, and is tied up in the notion of rejection of the societal norms of the time. It was also made even against those who acknowledged those gods existence. This last point is very important, because one attempted rebuttal I have seen from the modern atheist is that “You are an atheist to other religions.” Well, according to ancient Pagans, you could even be an atheist to your own religion! Of course, the point is that Christians are not atheists, but theists.

The word “atheism” was used back then as a damning charge of societal blasphemy–rejecting the ethnic practices of your own society in pursuit of another’s. Now, modern atheists attempt to forcibly include others in atheism with this kind of pithy phrase. The historical charge is interesting, but clearly entirely different from the modern one. Either charge, however, is inaccurate. Christians, by definition, are not atheists–theists cannot be atheists. The ancient cultural charge is of interest for its historical implications, but it is hardly evidence for the modern use of the charge of atheism against Christians.

I suspect that this post won’t silence many who will continue to persist in saying Christians are atheists. At that point, I suggest to others the following: the people who persist in this mislabeling should be written off as being just as irrelevant as the ancient Pagans with whom they share at least this part of their worldview.

On the Shoulders of Giants: Rediscovering the lost defenses of Christianity– I have written on how we may discover these enormous resources historical apologists have left behind for us. Take and read!

Here I have another go-round the web as we survey a posts on creationism, early Christianity, measurement in the Bible, interactions between men and women, and Robin Williams. Let me know what you thought of the posts in the comments, and be sure to leave a comment on those whose posts you enjoyed!

Book Plunge: “The Christians as the Romans Saw Them”– Nick Peters reviews a book which seems to be really interesting, because it is about how the Romans viewed the Christians in the early periods of Christian development. The topic should be of interest for those interested in apologetics, church history, history, and sociology.

All the biblical units of measurement– the “Overview Bible” has become one of my favorite sites. It’s value lies in both clear examples and posts but also in its generally denominationally neutral approach to the Bible. In other words, it’s a great site for general Bible knowledge. Here, there is a chart with every single biblical unit of measurement and a modern equivalent. It’s enormously helpful!

5 Ways Married Men Can Act Like Adults Around Women, Single or Not– This post has some satire in it as the author is responding to the notion that men are somehow incapable of controlling themselves around women.

NH Notes- Bent Rock on Display: The Sidelong Hill road cut– how might rocks bend? Must we attribute such bent rocks to the biblical Flood? Check out this post which has some great pictures and discussion of these topics. See my debate review between a young earth and old earth Christian in which this very topic came up.

Robin Williams, Matt Walsh, and Choice– Stephen Bedard offers some very good insight into Christianity and mental illness, along with a response to Matt Walsh’s comments about how Robin Williams’ suicide may be reduced to a choice.

On the Death of Robin Williams-A great reflection on Christianity, mental illness, and hope in the midst of suffering. Check out this thoughtful post.