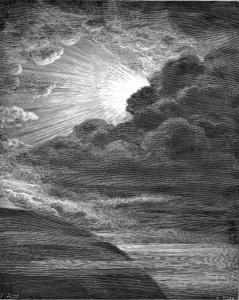 This is part of a series of posts on the “Life Dialogue/Origins Debate” within Christianity. View other posts in the series here.

The obvious point of contention between Old and Young Earth Creationism (hereafter OEC and YEC) is the age of the Earth/Universe. Hugh Ross argues powerfully for an old universe from both a theological and scientific perspective in A Matter of Days: Resolving a Creation Controversy.

The argument against the YEC position (derived from A Matter of Days) runs as follows:

1) The most coherent YEC position to explain the appearance of age in the universe is to hold that the universe appears to be old, but is not old in fact. (YECs often hold that God created light already traveling to earth, created Earth already to the point it could sustain life, etc.)

2) Scripture states that God does not lie. God is not a deceiver.

3) Scripture states that nature provides an accurate record of reality, though not a complete record.

4) 1) Scientific evidence (nature) demonstrates the universe is about 14 billion years old, as opposed to the 10,000(ish) years YECs grant.

5) Therefore, the universe is actually old. This follows from the accurate evidence of nature combined with 2) that God doesn’t deceive. If the universe is, in fact, 10,000 years (or so) old, then God has deceived humanity by making it in such a way that it appears to be much older than it is.

Premise 1) seems to definitely be the case. First, because the universe, according to the most modern science, is anywhere between 13-16 billion years old. Second, while YEC potentially has theories to explain why earth looks so old without relying on it being created already aged to a certain point (i.e. hydroplate theory), this does nothing to explain the background cosmic radiation; how we can see light from stars that are too far away to be seen yet were the universe 10,000 years old, etc. It therefore seems as though the only way to explain the apparent age of the universe is to argue that it is just that: apparent only. On this theory, God created the earth universe enough to support life, about 10,000 years ago.

“The heavens declare the glory of God;
the skies proclaim the work of his hands.
Day after day they pour forth speech;
night after night they reveal knowledge.
They have no speech, they use no words;
no sound is heard from them.
Yet their voice goes out into all the earth,
their words to the ends of the world.”

Premise 4) is at least implicitly accepted by YECs because they argue that even though science shows the universe is very old, it is not actually that old. It is worth noting that some YECs would claim that “real” and “unbiased” science would not lead to the conclusion that the universe is very old. There is little one can do to counter this claim other than argue that were that true, the YEC account would be able to present a fully testable, verifiable scientific model that shows that things like the background cosmic radiation are false.

Finally, the conclusion seems to follow from the preceding argument. God told us nature is an accurate record; He also created the universe (on YEC) in such a way that it appears to be billions of years old, but is not actually that old. Therefore, He created a universe that would deceive us into thinking, falsely, that the universe is old. But, God does not lie, so this cannot be true. Therefore, the universe is old.

I find this argument very convincing. It underscores my main problem with the YEC position: namely, that the best evidence does show the universe is old, and so God would be a deceiver were He to make it thusly.