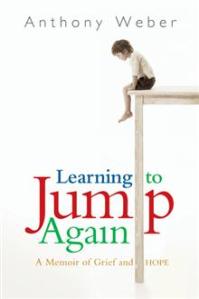 Anthony Weber’s work, Learning to Jump Again, is part memoir of a lost father, part philosophical treatise on the problem of suffering. The focus throughout is Weber’s father and the issues with mourning, suffering, and heroism his life and death brought up.

The book starts with “the Journal”–a series of entries from Weber’s journal during the time surrounding the death of his father. As one who is very close to his father, these entries truly struck home. There were many moments where this reader just lost it in tears. Weber does not hold back, at all. His father was suffering from jaundice due to cancer. He writes, “A friend stopped by that weekend to borrow some tools, and I stammered through an explanation of why my visiting father was yellow… He [the friend] knew that after the fall comes winter, and after the chill comes the cold, and he was mercifully silent” (2).

Weber does not restrict the period of mourning or the discussion thereof to the months immediately surrounding his father’s death; rather, the Journal contains entries as far as eight years (and later) after his father’s death. Christians reading the book are forced to the realization that it is not easy to struggle through these issues. When a beloved father dies, it is not something that passes with the seasons. Even eight years later, he wrote of his withholding himself from his wife and children, and the realization that came with it that he must trust in God, “even if I don’t always understand him” (76-78).

Yet the journal section is not merely a reflection. Weber shares lessons and thoughts he has on mourning, God, and the reality of pain in the world throughout his memoirs. He notes that too many people know about God without knowing God (72-73); refers to the experiences of wrestling God (45); and contrasts the ways and beliefs of “the flesh” with that of reality (33). Throughout this section, there is much for readers to take away.

The second part of the book focuses on the issues behind suffering and the Christian worldview. Weber’s discussion is an admirably easy-to-read introduction to many of the philosophical issues surrounding the problem of evil and other issues. In particular, his discussions of emotions, dreams, and prayer in particular offered a number of insights that readers will be interested in reading more about. Weber included a lot of resources for interested readers to explore, so the book serves as a valuable resource in that regard as well. His discussion of the problem of pain does an excellent job introducing difficult notions like distinguishing between types of the problem of evil (122ff). His discussion of the various possible routes theists can take to discuss the problem of evil is also brief but informative.

Throughout the book there are numerous quotes from various authors. Many of these are novelists such as J.R.R. Tolkien, Dean Koontz, Shakespeare, and C.S. Lewis. Others are from people like Helen Keller, Phillip Yancey, and Scripture. These quotes are often profound and fit the context perfectly. As a reader, this reviewer admits to frequently skimming past quotes when I see them in texts, particularly when they are out of context, but with Learning to Jump Again, the quotes all draw out new emotions, thoughts, and ideas very well. They add to, rather than distract from, the text.

Learning to Jump Again was a bit of a surprise for me. The section of the book that was a memoir served poignantly to draw readers into the heart of a mourning man. But it did not leave readers with that; rather, Weber constantly struggled with issues that Christians at all stages must deal with. Further, the philosophical section which encompassed the latter part of the book is an excellent survey of a number of issues. Many will benefit from the insights Weber provides. The book tugs at the heart strings and gets the mind working. Readers who have already extensively explored the issues of the latter part of the book will benefit from viewing the issues in the context of a memoir. Those who have not will benefit greatly from the discussion throughout the book. I recommend it very highly.