Book Review: “The Closing of the Muslim Mind” by Robert Reilly 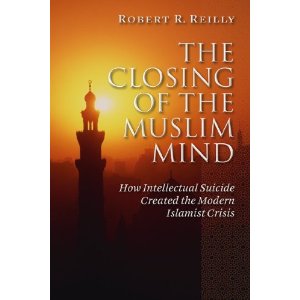 will be highly controversial. The title alone will spark anger and conflict. Yet when one gets to the content of the book, what will be found therein is a thought-provoking discussion about the consequences of particular beliefs.

The central point of the book is “the story of how Islam grappled with the role of reason after its conquests exposed it to Hellenic thought and how the side of reason ultimately lost in the ensuing, deadly struggle” (1). Reilly contrasts this with how the West dealt with some of the same issues: “The radical voluntaraism (God as pure will) and occasionalism (no cause and effect in the natural order) found in them [Muslim theologians in the 9th-12th centuries] were not seen to any significant extent in the West until… David Hume began writing in the eighteenth century. By that time the recognition of reality had become firmly enough established to withstand the assault… Unfortunately, this was not true in Sunni Islam, where these views arrived much earlier” (7).

Reilly maps out the history of the development of Muslim thought. Initially, once Islam came into contact with western philosophy, there was a great amount of interplay (11ff). One early struggle was between man’s free will and fate. This struggle was over the meaning of key verses in the Qur’an as well as a debate over whether the Qur’an is temporal or eternal and uncreated. The notion that the Qur’an is eternal and uncreated, in turn, restricted rationality from evaluating the meaning therein (19).

The development of Muslim reflection on the Qur’an and Allah’s will led to the replacement of reason with rationality (45-46). Similarly, because the Qur’an was Allah’s will, and it did not explicitly endorse kalam (a branch of Muslim philosophy and theology), this rational discourse was to be abandoned (47). Furthermore, this entailed the destruction of the notion of the “autonomy of reason.” Only within the structures of revelation could reason operate effectively (48).

Furthermore, creation itself has no inherent reason. Each moment is merely a “second-to-second manifestation of God’s will” (51). While one may be tempted to say Christianity is exactly like this (and some branches may indeed hold to this teaching), there is an important distinction between the two views, for on the Christian view of God, God’s action is driven by His nature, and so He will operate within His promises as well as within the boundaries He has set for himself. God, on most Christian views, is inherently rational and so will operate in rational ways. So while creation indeed subsists moment-by-moment because of the will of God, God does not arbitrarily change His will (56ff). On the Muslim view, Reilly argues, God’s will is absolute (as opposed to His nature) and so there is absolute voluntarism. At any time, Allah could will that which before Allah did not will (51-53). Furthermore, one cannot say one “knows” God because God is pure will. As pure will, there is no reason for any particular action, and so God is inherently unknowable (54ff).

Another consequence of viewing God as pure will is that good and evil are essentially vacuous terms. “If Allah is pure will, good and evil are only conventions of Allah’s–some things are halal (permitted/lawful) and others are haram (forbidden/unlawful), simply because He says so and for no reasons in themselves” (70). Allah is therefore above morality and the problem of evil is made meaningless, for evil is merely that which God forbids. Essentially, the system is voluntaristic theism (71ff).

Reilly argues that these theological positions have had dire consequences for Islam in the political realm as well. These positions undermine the inherent worth of human beings and posit the primacy of power over reason (128); democracy is the answer to a question the Muslim world has not asked (130), for if God is pure will, then His regents on earth are operating merely under his whims, and can be just as arbitrary in their decisions (131); “Man’s only responsibility is to obey” (131); finally, “there is no ontological foundation for equal human rights in Islam, which formally divides men and women, believer and unbeliever, freeman and slave” (133).

The consequences reach farther, however, and touch the sciences as well. For if Allah’s will is that which causes all things, then to say that there are “natural” explanations is to insult Allah. Instead of saying that hydrogen and oxygen yield water, people are instructed to say “when you bring hydrogen and oxygen together… by the will of Allah water was created…” (142). Of course, the denial of secondary causation touches upon more pragmatic areas of life as well. After all, if Allah wants something to happen, then it will; if not, then it won’t.

Reilly presents a number of contemporary sources demonstrating how these aspects have been radically undermined in the Muslim world, where often anything can pass as a news story and anything can be stated as true (147ff). Furthermore, the Muslim world trends towards underdevelopment and illiteracy. Reilly maintains that some of this is due to the consequences of the theological views outlined above.

Historically, the dilemma within Islam over reason vs. voluntarism came to a head when the Muslim conquests began to be turned back. When defeats happened, Muslims had to ask why it was that they were losing when, presumably, Allah desired them to win (165ff). Some viewed it as a consequence of the stagnation of science and intellectual development in the Muslim world. Others, however, viewed it as a need to go back to the roots of Islam and become even more radical. The world, therefore, according to Reilly, is faced with a crisis: can reason be re-introduced into the Muslim theology and trickle down into every aspect of life, thus freeing the Muslim world from the shackles of voluntarism? Or, will Islam continue down its path and overemphasize the radical occasionalism of nature and God, while undermining reason? Such is the crisis.

It is striking how well Reilly has supported his theses with quotes from the writings of various Muslim  theologians and philosophers. Throughout the work, he quotes numerous scholars from both modern and ancient sources. What these quotes reveal is that his points are not found in a vaccuum–rather, the notion that the absolute, determinating, arbitrary will of Allah underlies everything that happens does indeed undermine rationality.

It is interesting here to reflect briefly upon the notion that some of these same themes are found within certain branches of Christianity. Whenever God’s will is placed as the ultimate source of all activity on earth (voluntarism/occasionalism) rather than as a providential will which guides such activity, reason and rationality can be jettisoned just as easily as they were in the development of Muslim thought. Similarly, if Scripture is seen as above any kind of rational inquiry to determine its meaning, one can replace man’s cognitive abilities with blind faith. Reilly’s book can therefore serve as much a warning for Christians engaging in doctrinal reflection as it is a call to Muslims to restore rationality to their faith.

Reilly’s work, The Closing of the Muslim Mind should be seen as required reading for those interested in interfacing with the Muslim faith. Reilly ties together compelling chains of thought which have led to the current Muslim crisis and demonstrates how current thinking is a result of the past. It is a thoroughly researched book and those opposed to his conclusions will be hard-pressed to show the cracks in his theses. I highly recommend this work. Once one gets past the title, which may be seen as  inflammatory by some, Reilly presents well-reasoned, compelling, historically grounded argument about how the theology of Islam has led to the destruction of its intellectual capacity.

Robert Reilly, The Closing of the Muslim Mind