The Avengers: Sin, Salvation, and Jonah 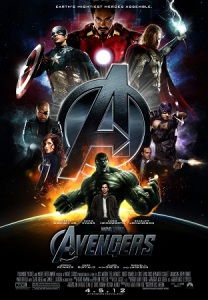 I have already reflected on Marvel’s “The Avengers” from a Christian perspective, but upon watching the recently released blu-ray and DVD

I noticed two other major themes in the movie that I had missed in the previous post. So, time to look back at this huge blockbuster and offer some more thoughts!

There will be SPOILERS here.

Slavery of all mankind

A thoughtful friend of mine on Facebook pointed to the dialogue between Loki and a crowd of people near the beginning of the film wherein he forces them all to kneel. Loki stands before them and shouts:

Kneel before me. I said… Kneel! Is not this simpler? Is this not your natural state? It’s the unspoken truth of humanity that you crave subjugation. The bright lure of freedom diminishes your life’s joy in a mad scramble for power. For identity. You were made to be ruled. In the end, you will always kneel.

Think of how this resonates with the Christian notion of slavery in sin. We align ourselves with things that we love. Greed. Envy. Pride. Lust. Gossip. These things, while initially pleasurable, ultimately enslave us. Loki’s speech was very discerning, however. For even though these things come to enslave us and take time away from the goods in life, we come to love them, to glorify them, and to become attached to them. We want to be enslaved in sin. We desire it. Sin calls to us, enslaves us, and we love it.

Yet, as in the movie, we are called to rise up against this sin. But we can’t do it on our own. As I discussed in my other post on “The Avengers,” we “need a hero.” We cannot rise out of slavery. Paul discusses this very notion in his letter to Rome:

Don’t you know that when you offer yourselves to someone as obedient slaves, you are slaves of the one you obey—whether you are slaves to sin, which leads to death, or to obedience, which leads to righteousness?  But thanks be to God that, though you used to be slaves to sin, you have come to obey from your heart the pattern of teaching that has now claimed your allegiance.  You have been set free from sin and have become slaves to righteousness. (Romans 6:16-18, NIV)

Who is it that set us free? We did not do it on our own. After all, we became slaves to sin and offered ourselves freely to it. No, it is Christ Jesus who set us free. He was the “hero” who broke the chains and gave us our freedom in Him.

Debts that Cannot Be Paid

Later on, Loki converses with Black Widow. They discuss the notion that Black Widow has “debts” to others. She owes them for the things they’ve done for her. She says that her ledger is in the “red”–she is on the wrong side of debt. During this conversation, Loki tries to break Black Widow down verbally, “Can you wipe out that much red? …Your ledger is… gushing red.”

Loki’s comments are telling, for they are actually true of not just Black Widow but of everyone. We all have our debts. We have our sins that we commit in private, away from others. We have the anger we have expressed through thought and deed. Our ledgers are overflowing, they gush red. Our sins are too great for us to repay; we cannot wipe away the red.

Yet God has loved us so much that He paid the debt. Jesus, God in human form, came to earth and paid that debt for each and every one of us. Our ledgers were full, but now we’re in the black. We have become co-heirs with Christ and have received salvation by grace through faith. We are justified through Jesus’ death and resurrection. God forgives us our sins and wipes our ledgers clean on His behalf.  Loki’s comments are not unlike those of the Devil, trying to convince us that we are still in debt. Can anyone–even God–wipe away all the wrongs we’ve done? Fortunately, that answer is yes. Although we ourselves cannot repay it, God has done so for us.

Another great line in the film is when New York City is under attack (seriously, why can’t that city catch a break?). Iron Man comes face to face with a gigantic enemy ship/creature/thing (my wife named it “Leviathan” and I think that’s a great title) and has to take it down. He asks his onboard computer: “You ever heard the tale of Jonah?” He then bursts into the mouth of the Leviathan and flies through it, exploding from the end and destroying it.

No, the reference was never explained. Hey, if you don’t know the story, look it up! It’s one of my favorites in the Bible. Just get out  a Bible (or search online) and flip to “Jonah.” It’s short, and I guarantee you it’s worth the read!

It seems to me that there are a number of themes in “The Avengers” that Christians can relate to. The notion of the incredible debt we owe and cannot pay due to our past resonates directly with the Christian worldview. It points towards the salvation we have in Christ. Similarly, our slavery to sin cannot be overlooked. We want to sin, we crave it, but thankfully those bonds are broken in Christ.

Engaging Culture: A Brief Guide for movies– I reflect on how Christians can engage with popular movies in order to have meaningful conversations with those around them.

J.W. Wartick has an MA in Christian Apologetics from Biola University. His interests include theology, philosophy of religion--particularly the existence of God--astronomy, biology, archaeology, and sci-fi and fantasy novels.
View all posts by J.W. Wartick »
« A violation of God’s Will: Abortion- or why no Christian should be pro-choice
The Myth of “Religion”: Constructing the Other as an enemy »

8 thoughts on “The Avengers: Sin, Salvation, and Jonah”