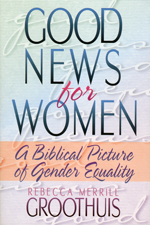 Groothuis first turns to a Biblical case for the equality of men and women. She bases this notion on several Biblical texts. She refers to God’s creation of both male and female in the image/likeness of God (21ff). Her argument also goes into Galatians 3:26-28 and notes how it again draws out the equality between male and female. Regarding the discussions of women’s silence in the churches, Groothuis parallels these passages to those about slaves submitting to their masters:

[T]he strategy of the New Testament church was to tolerate the social subordination of slaves and women so as not to risk alienating non-Christians from the gospel, and yet to modulate and moderate these customs, and ultimately to point beyond them to God’s original intention for human relations. Today, however, when non-Christians are not likely to be offended by an equalitarian gospel, but are likely to find a hierarchical gospel offensive, we have no reason to perpetuate the cultural practices that were intially intended for Christians living in patriarchal societies (25).

Groothuis concludes that throughout the Bible, there is a pattern in which male and female are equal in being. They are, in other words, ontologically equal. Neither is more valuable than the other.

It should be noted that most complementarians today are willing to grant this case. They agree that women and men are indeed created equal and should have equal rights. Groothuis then turns to a series of philosophical arguments which seek to demonstrate that the complementarian position cannot consistently hold that women are equal to men while holding that they are excluded from the ministry. Her argument, therefore, goes deeper than an exegetical challenge. Instead, her argument undermines the theological core groundings of complementarianism.

The very core of Groothuis’ argument is that complementarianism is grounded upon an ontological difference between male and female. The reason she holds that complementarinism must hold this position is “[b]ecause a woman’s traditionally inferior status follows necessarily from the single fact of her essential, female nature, her status is itself a function of her ‘being’ [ontology]; it is determined by what she is, not by what she can do” (53). Complementarians hold that women cannot hold certain offices of the church due only to the fact of her femininity. It is not based upon a functional subordination in which the female chooses to take up a role that is subordinate (62ff); instead, it must be grounded upon the female’s nature as a female. There is nothing about the female which limits her from being a pastor, on most contemporary complementarian positions (that is, those which no longer hold that women are excluded from the ministry simply because she is not as smart or gifted as men in general). Instead, it is exclusively her feminine nature which determines her role as subordinate. Therefore, it is part of her essential nature. I have argued this point myself elsewhere: “Women in the Ministry: The philosophy of equality and why complementarianism fails.”

Grothuis continues with extensive argument to rebut the notion of servant leadership (78ff). She also deals with various analogies complementarians use to attempt to ground equality and hierarchy, such as the Trinity (55ff–it should be noted that grounding subordination in the Trinity undermines the doctrine of the Godhead).  It should become immediately apparent as to how this leads to a problem for complementarians. Biblically, they are forced to concede that women and men are, in fact, equal. However, their position undermines this Biblical position of the equality of men and women. Therefore, it seems their position fails.

Groothuis then turns to a number of strategies that complementarians have used in order to try to tie the subordination of women in to patterns of the Godhead. Unfortunately, many of these strategies end up making God into a gendered creature rather than a transcendent Creator. Some complementarians, such as C.S. Lewis, actually go so far as to make God male (93). Groothuis points out that this gendering of God cannot be affirmed based upon the Bible. One difficulty is that both male and female language is used of God (93-94). Yet she insists that the debate must not become a simple adding up of verses on either side to see how God illustrates either gender. That would turn God into a “God who suffers from some gender identity confusion” (93). Instead:

Groothuis also spends some time dealing with some of the odd–and frankly, pagan–ideas used by some complementarians. For example, some argue that God must act as a male in the creation event: one who gives so much, while the created world merely receives. To be blunt, they describe God’s creative act as a sexual act, with no Biblical support. Groothuis rightly points out that this idea is little more than paganism dressed up in theism, but goes on to note that “It seems a good deal of imagination and determination is required in order to characterize the strenuous effort required of a woman’s body in nourishing, growing, and delivering a child as ‘overwhelmingly passive,’ while depicting the male role of standing around watching it happen as ‘active’!” (95). Another abuse of gender in the Godhead involves some complementarians arguing that because Jesus was a man, only men can be priests (109ff). Groothuis points out that “If we are to regard maleness as essential to who Christ is as Christ, not only must we question whether Jesus Christ can represent women as fully as he can men… we must also view women as essentially inferior to men. Women lack the Christlike attribute of maleness that renders men best qualified to represent Christ…” (113). Interestingly, then, complementarians who utilize this argument essentially undermine the doctrine of the atonement: for Christ’s maleness is emphasized to the point that Jesus is not an adequate representation of humanity. He is essentially male.

The second half of Good News for Women focuses upon an evaluation of the texts used to support complementarianism. These texts are examined in light of the theological points already established. Namely, women and men are created equally as imagers/likenesses of God; and that any attempt to ground hierarchy ultimate fails because it undermines this Biblical concept of equality. A full presentation of Groothuis’ analysis of these texts would probably triple the length of this review, and I don’t see any way to sum up these arguments adequately in a few sentences, so I unfortunately must leave it to those interested to read the book to see these analyses.

Finally, it would be remiss to go without mentioning the outstanding contribution Groothuis gives to the discussion of egalitarian marriage. Groothuis discusses marriage in detail for over 40 pages of the book. What is astonishing is how lucidly she lays out the principles of egalitarian marriage. She illustrates the nature of marriage and how it is a give-and-take with both persons involved as opposed to one ruling over the other. She also discusses in detail how such an egalitarian system can work without having anyone to have a vote to “trump” the other’s vote. Frankly, the book is worth reading just for her discussion on marriage.

Groothuis’ most important contribution here is in the first part of her book, which establishes a strong theological and philosophical case for the equality of men and women in teaching roles in the Church and equal roles in marriage. However, there are numerous important insights throughout the text, both into specific verses and into overarching themes in the debate from both the complementarian and egalitarian positions. Groothuis’ discussion of egalitarian marriage provides a way forward for discussion on the roles of men and women in marriage and also helps to give insight into the Biblical view of marriage. Overall Good News for Women

See my other writings on egalitarianism on my theology page (scroll to the bottom).

I argue that certain complementarian arguments undermine the Trinity.

I review a book which focuses entirely upon exegetical issues related to egalitarianism: Man and Woman: One in Christ.