The Rocks Cry Out: A visual journey on a lake and its implications for the age of the earth 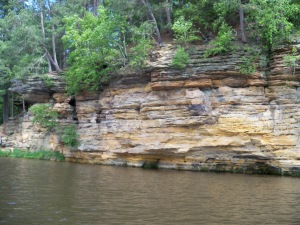 I recently visited Mirror Lake in Wisconsin and had the opportunity to canoe along the lake. Looking up from rowing the canoe, one is able to see exposed rock formations on either side as one goes from one major part of the lake to the other. How did this lake get here? How did the rocks erode as they show?

Although we occupy the same paradigm with regards to the origin of all things, Christians are divided along a spectrum of possibilities (other paradigms) about the origin and diversity of life and species. Moreover, Christians are divided on the age of the Earth itself. Is the Earth a few thousand years old or a few billion years old? It is around this question that I shall focus here. Which subdivision of the supernaturalist paradigm better accounts for the evidence? Is the Earth “young” or “old”?

The Rocks, the Flood, and the Questions

Take a look at the photo above. The stone you see there is largely sandstone, layered upon itself. One can go up to the wall and crumble some of the rock between one’s fingers. The layers are extensive, going several dozen feet above the water level before diving below the surface. Where did all this sand come from? Why is it now here, above the ground and exposed?

Global Flood and a Young Earth

There are a number of ways to answer this question, but there is a stark difference between how the answers are given. Young Earth Creationists (hereafter YEC will refer to Young Earth Creationists, Young Earth Creationism, etc.) largely hold to the position that this sand was deposited during the Noahic Flood found in the Bible. That is, these layers of sand were deposited all at once during the great deluge which covered the surface of the earth. Other YECs hold that after the flood, some additional depositions were made by other catastrophic events, including the Ice Age.

What of the notion that nearly all this sediment was placed there by the Noahic Flood? There are immediate problems with this explanation. How is it that the layers are clearly distinct types of rock? For example, I canoed up to the rock shown in the picture and observed the fact that the rock was almost uniformly sandstone. But if the explanation for this is that the sediment was mired together in the Flood, how is it that the types of stone were so neatly parsed out? Should we not instead observe all types of different sediments congealed together? Now, a YEC might counter by pointing out that perhaps the granules were deposited according to their specific gravity, but this would be to appeal to a notion which has been proven wrong via direct observation since John Arbuthnot wrote An Examination of Dr. Woodward’s Account of the Deluge in 1697 (Montgomery, 72-73, cited below).

But there are even more problems with this explanation. If the sediments were all stirred up during a violent Flood, then how did marine animals survive? How did fossilization occur when such violent activity was taking place? What of unconformities in the rock? The issues multiply the more one considers the explanation proffered.

The alternative YEC interpretation–that some of the sediment was placed only later, during the Ice Age, runs into its own share of major difficulties.

Other explanations come forth via inference from principles of geology. It should be noted that the foundations of geology were largely laid down by Christians like Hugh Miller and Steno who had themselves reflected upon the Flood and its implications for geology, while also looking at the natural world.

The geology of the Mirror Lake area in Wisconsin, according to this position, was shaped over the course of very long periods of time. The sandstone was cut across during a period of glaciation about 10-20 thousand years ago, and it rests on top of millions of years of geologic processes which created other rock formations, which each have their own explanations of how they came to rest under the sandstone. The lakes themselves were formed by Dell Creek, which takes a right angle. The reason for this angle is explained by “glacial outwash” which blocked the flow of the Creek and forced it to proceed at an angle. The Creek then proceeded to flow into the area it now occupies, shaping the landscape as it moved. It is amazing to consider the time which one can observe as one travels through this area, which was carved by a Creek! For a detailed summary of the formation of the geology of this area, check out the Wisconsin Geological Survey’s report on this region.

Another Challenge for the Flood Explanation

As I canoed through the two major portions of Mirror Lake with several friends, it was interesting to consider how all the winding we experienced as we traversed could have been formed. If this area were formed by the Noahic Flood, then how could it have occurred? After all, the sediment through which it cuts is supposed to have been formed during this flood. But how did the rock get hard enough to be carved through even as it was settling? Why would not the Flood waters have simply caused a mixing of materials?

Plus, one must consider the angle that the occurs in the Mirror Lake area. Why, given fresh layers of sediment deposited by the Flood, did the waters carve out an angle? There seems to be no physical explanation for this phenomenon, granting a YEC paradigm. If the Flood accounts for Earth’s geologic past, then how does it actually explain the physical world?

YECs have sometimes contended that the great amount of pressure put on the sediments by the Flood waters would have allowed for these rocks to form quickly enough to then be carved by the Flood. But if this were the case, how did any marine life survive this extreme pressure? How did delicate fossils get preserved when so much pressure and turbulent water came crashing upon them? Again, we see the difficulties continue to multiply. 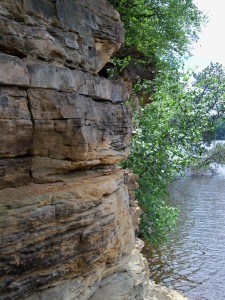 Very often, YECs will make a distinction between their own view as catastrophism and other views as uniformitarianism. I have discussed this distinction elsewhere, but it is highly relevant for the observations I was able to make around Mirror Lake.

It absolutely must be noted that this notion of either catastrophism or uniformitarianism is a false dichotomy. Note that standard geology describes the formation of the Mirror Lake region as both a series of lengthy events taking place over fairly uniform time periods (the formation of the rocks and layers of sediment themselves) and a series of catastrophic events (wherein the Wisconsin Glaciation both scoured the surface and left new deposits and later flooding from the glaciers melting helped carve a path through the area to help form much of the region). That is, there is no either/or question. It is a matter of both/and within standard geology. Catastrophes are part of Earth’s past, but they do not destroy completely the record of the uniformities which have shaped the planet.

We have already noted briefly many problems for a YEC paradigm. Perhaps there is an even greater difficulty to be found. YECs wish to offer an explanation for the geologic past and they hold that their reading of the Bible is the most literal. But after looking into YEC explanations of how specific geological formations are formed, is it really the case that YECs are reading the Bible literally? Where does it, in the text, suggest extremely high pressures from the water, the destruction of Earth’s crust or at least its extensive modification, the formation of lakes and rivers due to the activity of the Flood, the deposition of sediments, the formation of fossils, or any number of other specific things that YECs tend to argue are results of the Flood?

My journey along the Mirror Lake watershed was enlightening. It was as though I could observe geologic time simply by looking at the rock formations around me. Moreover, it presented me with ample opportunity for reflecting upon the varied explanations given for how all these things were formed and shaped. It seems clear to me that the YEC paradigm suffers from impossible difficulties.

Like this page on Facebook: J.W. Wartick – “Always Have a Reason.” I often ask questions for readers and give links related to interests on this site.

Gregg Davidson vs. Andrew Snelling on the Age of the Earth– This debate was between two Christians about the age of the Earth. I found it highly informative. Check out this post, which surveys the arguments.

Answering Common Young Earth Creationist Arguments– I survey a number of theological, Biblical, and scientific arguments put forth for YEC and find them wanting.

Check out my other posts on the Origins Debate.

32 thoughts on “The Rocks Cry Out: A visual journey on a lake and its implications for the age of the earth”