By Whose Authority? The question of authority in the church 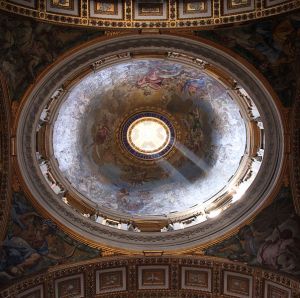 The Question of Authority

One cannot question that perhaps the most central issue which divides the Roman Catholic Church from Protestants is the question of authority. The issue touches upon a number of others. Who has the authority to interpret Scripture (ultimately)? What is the structure of a church? How do we learn doctrines? It must be acknowledged by all that the Roman Catholic Church’s claims to authority are paramount. It is possible for the Church to claim infallible authority for its teachings, however few claims they have actually made.

The question of authority persists in its importance today. If one church body–the Roman Catholic Church–is capable of infallibly defining doctrine for the whole of the Christian world, and some deny these doctrines, then that automatically means that those who deny these doctrines are in some sense denying God. It is important to note what the Church itself has said regarding this doctrine. Here is part of the definition of infallibility from the First Vatican Council (Section 4, Chapter 4):

[W]e teach and define as a divinely revealed dogma that when the Roman Pontiff speaks EX CATHEDRA, that is, when, in the exercise of his office as shepherd and teacher of all Christians, in virtue of his supreme apostolic authority, he defines a doctrine concerning faith or morals to be held by the whole Church, he possesses, by the divine assistance promised to him in blessed Peter, that infallibility which the divine Redeemer willed his Church to enjoy in defining doctrine concerning faith or morals.

What is to be said about those who deny any teaching that the Pope declares infallible? Again, I’ll allow the Church to speak for itself:

So then, should anyone, which God forbid, have the temerity to reject this definition of ours: let him be anathema.

Because I personally do reject some of the infallible teachings of the Church (such as the Marian Dogmas of perpetual virginity, immaculate conception, and the asumption), I, by virtue of this teaching, am anathema. Thus, it should be clear that the authority of the church is at the core of the divide between Catholics and Protestants.

The problem of authority is often pressed by Roman Catholic thinkers as a kind of argument against Protestantism. The way in which it is is presented is often through an argument for unity. For example, the claim is made that the Magisterium is capable of preserving doctrinal unity to a higher degree than the Protestant denomination. The claim is also often accompanied by an offhand remark about the number of Protestant Denominations. What is the implication? The discordant voices within Protestantism are, in some way, to be viewed as a discrediting piece of evidence when it comes to the nature of the truth claims of these churches. The implication (as quoted here) that some Roman Catholic apologists draw is that this proves the necessity of an infallible interpreter of doctrine/Scripture.

Initially, the claim sounds a bit appealing. One may trust in the infallible Church to settle the debate on various theological topics once and for all. One need not try to draw out the implications of specific texts for themselves, leading to any number of diverging interpretations and arguments and ultimately, the splitting of the church into ever-smaller units each warring against each other and saying they have the truth.

One must then ask the question: are you infallible? That is, is your [fallible] decision to make the Roman Catholic Church your infallible authority itself an infallible decision? Could you be mistaken? If the answer is that you are indeed fallible and you may be mistaken, then it must follow that any trust placed in the allegedly infallible Church must be equally fallible and stand upon shaky ground. For it is the person who joins the church who has joined the Church, not vice versa. The decision rests upon the individual, and it is therefore a fallible decision to make the Church infallible for one’s faith.

This argument therefore tears down any grounds one might have for asserting that one should trust the infallible Church in order to eliminate the discordant voices of Protestantism or choose-your-own-theology which may be the case outside of the Roman Catholic Church.*

*This is not to mention the often discordant voices within the Roman Catholic Church itself and the fact that fallible persons must interpret allegedly infallible statements in order to discern what they mean. Are you an infallible interpreter? Surely not.

A Final Note for my Roman Catholic Readers

I want to end with a call to my Roman Catholic readers. First, I would note that in this post I have not sought to insult or denigrate Roman Catholics or their beliefs. I have allowed the Vatican to give its own definitions and presented them, I hope, without distortion. Second, I think that we need to be honest about the differences that we have rather than covering them up. Third and finally, these differences should not, I hope, lead us to be incapable of working together in social and yes–at times–even theological issues. I hope that you will be comfortable interacting with me on this topic and others. I appreciate whatever insight you would like to share.

The Church Universal- Reformation Review– I discuss the possibility of maintaining a universal church in light of the breakup of the church into ever smaller groups. I place this discussion against the background of Reformation theology.

“20,000 denominations”– an in-depth analysis of the claims of those who wish to use denominationalism as an argument against sola scriptura. The link for the article the author evaluates is now down.

Much of the argument found herein has been learned from listening to or reading James White, and although I do not directly quote his work I am greatly indebted to him. A particularly helpful work was The Roman Catholic Controversy

5 thoughts on “By Whose Authority? The question of authority in the church”