Some quick thoughts on the “Noah” trailer 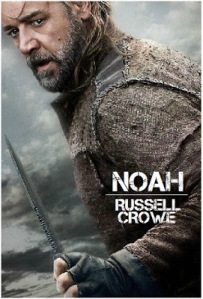 It’s coming, folks. A big-budget movie about Noah and the Flood. A trailer was recently released for the film, in which Russell Crowe plays Noah.

I thought I’d share some thoughts on the brief glimpse we’ve had on the film, after a brief narration of the trailer. See the end of the post in which I reflect on a couple things not in the trailer.

The trailer opens with Noah having some weird vision which seems to depict the Fall of humanity. He wakes up and says “He’s going to destroy the world.” Some old dude tells Noah about a story passed down from his father about how if humans continued in their wicked ways, the “Creator would annihilate this world.”

The old man  also tells Noah that this Creator is able to communicate with him in a way he understands, which is apparently by dunking Noah in water and showing lots of burning things and then a flower growing, because, you know, that is really understandable. But apparently Noah gets it because he decides to build a big boat. One problem: the local King is upset about it for some undisclosed reason.

Lots of animals come to load up the Ark. It starts to rain. People try to get on the Ark but get blown up by water. The fountains of the deep are depicted as big geysers blowing up all over the place. Rain.

By the way, Hermione plays someone [I looked it up and she plays “Ila” who is apparently Noah’s adopted daughter and a heartthrob to Shem(?)], so that’s kind of cool.

Well, it looks like we have some Hollywoodization here. I’m not really sure what to think. First, I appreciate the fact that in the trailer the responsibility for the Flood is placed upon humans, who continued to behave in clearly brutal ways.

Clearly the random king showing up with some reason to be angry with Noah is fictitious in the sense that it is not recorded in the Bible. I suspect it is there to add drama to the narrative, but what will it add in addition to that? What plot exposition will be given that diverges from the biblical account? The Old Testament in many places is very terse, not many details are given. It is tempting to fill in the details, and it is clear this film will do so.

The movie also seems to be thankfully not avoiding the theological issues. I will be very interested to see how God interacts with humanity. Despite my tongue-in-cheek narration above, I think there is a point to be had that God may communicate in phenomenological ways, and that the biblical narratives often do report things from the viewer’s perspective.

Also: those clothes! Why is Noah wearing a tailored shirt made out of some weird attempted period-piece? What kind of styling is this!?

Joking aside it looks kind of cool. As a film, it looks like it will be exciting. Lots of special effects; extra tension added in; you name it. But how much correction of faulty understanding of the biblical narrative will need to be done afterwards? I don’t know. On the other hand, perhaps it will get people talking more about the Bible. It may help spur discussion of the issues raised in that passage, which could expand beyond that. Could this be a tool for believers? It may be best to read up on the Flood story yourself.

The movie is clearly generating a lot of discussion already, and having drawn in a big-name director as well as actors/resses, it will likely be discussed broadly.

Be assured that, God willing, I will reflect on the movie when it comes out next year. Until then, let me know your thoughts!

Having Written This, I discovered something else:

Apparently there may be quite significant additions to the film from the pseudepigraphal Book of Enoch, including some scenes with 6-armed angels and the like. I’m disappointed to learn about this divergence from the Biblical story. I get creative license, but this is a bit much.

Check out this excellent post which discusses the screenplay. My disappointment continues to mount as I read more about it. Note that I wrote this post 100% based upon the trailer, with almost no prior knowledge of the movie. The post I just linked to has major spoilers for the differences from film to movie. It looks like what we’re getting is something which is not faithful to the biblical story. I find that deeply disappointing. I get the use of creative license, but based upon this reading of the screenplay, it goes beyond creative license and into exploitation of the Bible to forward a specific agenda.

I wonder whether the rumors floating around about the studio wanting to make significant cuts to the film might be do to this negative reaction from Christian viewers. I suspect that it is possible that the studio wants to make it more palatable to Christian audiences.

The Image was found on Google and is not mine. I could not find rights to it, and do not claim them.