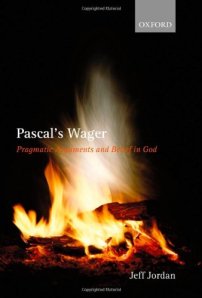 For some time, I’d been wanting to put some effort into studying Pascal’s Wager. I picked up Pascal’s Wager: Pragmatic Arguments and Belief in God by Jeff Jordan in order to familiarize myself more with the philosophical grounding behind the argument. Jordan approaches the Wager through a lens of analytic philosophy and, I think, demonstrates that the argument has some force to it.

Jordan’s work has great scope. Several aspects of the Wager are brought to light.  He analyzes several different formulations of the argument, while also noting where the argument has been changed or modernized. For example, the notion that Pascal’s Wager was infinite bad vs. infinite good is a more recent innovation than Pascal’s original argument.

He studies the argument contextually to determine whether the Wager was intended as a generalized theistic proof or an argument for Christianity. Numerous objections from leading critics of the Wager are put to the test. Ultimately, a version of the Wager developed by William James is put forward as an argument that passes the philosophical muster. Jordan analyzes this argument from many angles, ultimately demonstrating that it overcomes the challenge of the “many gods” objection and provides grounds for Christian faith.

The value of Pascal’s Wager may is increased by the fact that many aspects of Jordan’s work are applicable to other arguments or areas of interest for philosophers of religion and apologists. For example, Jordan raises significant challenges to the notion that philosopher’s fictional deities may actually be counted as evidence for a “many gods” objection (75-76; 80-81). Another example is a rather interesting argument he derives from the work of James Beattie (1735-1803- Jordan notes Beattie is at times rightly accused of misrepresenting Hume’s arguments) about whether attempts to deconvert might bring about pragmatic wrongs (190-194). These and other tantalizing topics command even more interest than the book might otherwise have had.

Simply put, Pascal’s Wager: Pragmatic Arguments and Belief in God is a phenomenal, thought-provoking work that will have readers rethinking their evaluation not only of the (in)famous Wager but also of a number of related topics. Even at its steep price tag, the book is a bargain.

Pascal’s Wager: The Utility Argument Examined– I outline and defend one of the versions of Pascal’s Wager which Jordan brings up in this work. I find it to be a very interesting argument and a great addition to the apologist’s toolkit.