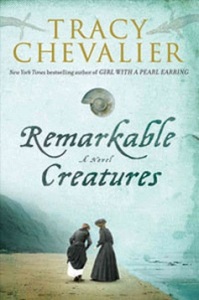 Remarkable Creatures by Tracy Chevalier is a historical fiction novel based on the lives of Mary Anning and Elizabeth Philpot, early fossil hunters in England. It raises an astonishing number of worldview questions related to women, paleontology, and creationism, and we will here discuss just a few of these issues. There will be SPOILERS in what follows, but it is history!

Perhaps the most fascinating aspect of Remarkable Creatures is its survey of the controversies surrounding the discovery of fossils that challenged reigning scientific and religious paradigms. One of the greatest challenges was to come to believe that extinction had occurred. Think about it: if all you ever knew was the living beings around you, what possible reason would there be for thinking that those beings could die out, such that none were left anywhere? Mary Anning and Elizabeth Philpot’s finds of creatures like icthyosaurus challenged even the greatest thinkers of the time to come up with new paradigms for fitting these creatures–which didn’t exist anywhere on earth at their time–into reality.

For a time, it was thought that the bones of icthyosaurus were just those of a crocodile. But then Mary Anning discovered a complete fossil that included huge eyes (eyes that even had bones in them!). This forced people to the realization that these truly were novel creatures.

It’s a fascinating thing to think about, because the problem wasn’t just that it forced them to come up with a new concept–extinction. It also led to theological crises. After all, why would God create creatures that would all die out? One pastor in the book was particularly disturbed by this notion. He argues with Elizabeth Philpot: “All that you see about you is as God set it out in the beginning. He did not create beasts and then get rid of them. That would suggest He had made a mistake, and of course God is all knowing and incapable of error…” (144, citation from large print edition [only one they had at the library]). Philpot then comes back, noting that rock formations change and that if creation is supposed to be without change, how could rock fall or change a cliff face? The pastor ultimately comes back by saying that “God placed the fossils there when He created the rocks, to test our faith…” (145). Chevalier cleverly puts an answer in Philpot’s head: “It is my faith in you [the pastor as interpreter of Scripture] that is being tested, I thought” (145). The pastor, it should be noted, was also using, as was commonplace, Bishop Ussher’s chronology of the world, which put the date of creation “on the night preceding the 23rd of October 4004 B.C.” (144). Philpot wryly remarks- “I had always wondered at his precision.”

Another idea that was prominent at the time was the notion of anatomical laws or conformity with Aristotle’s Great Chain of Being. According to these ideas, there is a kind of hierarchy of being that puts humans at the top (usually) with other creatures in stages below that. It is not evolution, for it predates that idea. Instead, it is a way of ordering those creatures which exist now according to some principles. Mary Anning’s finding of a plesiosaur challenged this chain of being by violating the ways that creatures were supposed to appear or exist.

Late in the book, Elizabeth Philpot is finally questioned on what she thinks about the fossils and God. She is pleased to finally be asked:

I am comfortable with reading the Bible figuratively rather than literally. For instance, I think the six days in Genesis are not literal days, but different periods of creation, so that it took many thousands–or hundreds of thousands of years–to create. It does not demean God; it simply gives Him more time to build this extraordinary world. (391, again note reference from large print edition)

Although this is a work of historical fiction, these debates continue into today. Some groups still use Bishop Ussher’s chronology to date the age of the earth. Although few would argue that there are no extinct creatures, new forms of the same arguments have led to the young earth creationist movement, in which people argue that the Bible requires us to believe that all the creatures that are extinct were alive at the same time as humans. I have personally had conversations with young earth creationists who say that fossils are one way God tests our faith (I know of no young earth organization who would use this argument, thankfully). Scientific findings continue to challenge entrenched religious beliefs.

One is perhaps left to wonder, like Philpot’s thoughts, on how some people get so much precision. The Bible nowhere puts a date on creation. Nor does the Bible demand that all creatures that have ever lived were allowed at the same time. Yet these beliefs persist, and many Christians insist that if one does not hold to them, they are not true Christians, or are perhaps abandoning Scripture. As in Mary Anning’s time, we still have much work to do. We cannot let our external paradigms (things like Aristotle’s Great Chain of Being, or perhaps more germane, our own assumptions about how texts ought to be read “literally” and what the word “literal” means) determine how God is allowed to act or what God may communicate to us.

The book does a good job portraying the way the contributions of women were ignored or even stolen. Mary Anning was an expert fossil hunter–self taught. Yet time and again, men used her expertise to find their fossils and then take credit for the finds. Although her contributions were acknowledged later, her life of poverty is a sad testimony to the way that unequal treatment of women can so easily be perpetuated. The book portrays this unequal treatment in many ways. First, there is the exclusion of both Philpot and Anning from societies of geologists (this was before paleontology was a separate field of study from geology). Second, social norms provide for a simple way to create inequality. When one sex is given the benefit of the doubt (men, in this case) while the other is considered permanently damaged even by gossip about impropriety (women), restraints upon the social movement and capacity of the latter follow by necessity. Third, the contributions of women were ignored.

Unfortunately, parallels to each of these scenarios continue today. Women are excluded from certain groups or positions (such as those who keep women from becoming pastors), thus creating spiritual inequality. Conventions of purity culture, for example, treat women as “impure” or “damaged goods,” putting the onus on young women to abstain while simultaneously removing blame from young men. The power of imagery–objectification of women–continues to impact both women and men in negative ways. We can learn from Remarkable Creatures that much progress has been made, but it also points us in the direction of more work to be done.

Remarkable Creatures is a fascinating read. Although it is dry at times, it provides much insight into a number of discoveries that changed the world. It highlights the careers of two women who contributed much to paleontology in its formative stages. Perhaps most importantly, it challenges us to keep improving, to keep thinking, and to keep observing God’s remarkable world.

Popular Books– Read through my other posts on popular books–science fiction, fantasy, and more! (Scroll down for more.)

Mary Anning: Plesiosaurs, Pterosaurs, and The Age of Reptiles– A post that highlights the contributions Mary Anning made to the paleontology. It particularly focuses on how these discoveries pre-dated Darwin.