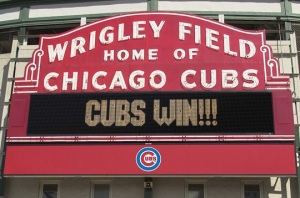 There was one night I was in bed but could not fall asleep. I believe it was when the Cubs had just tied the NLCS 2-2 with the Dodgers. I was bubbling with joy because they’d just tied the series. It meant there was a chance, however remote, that the Cubs could make it to the World Series for the first time since 1945. It meant that, maybe, there wouldn’t have to be a “Next Year” this year. Maybe, just maybe, it could happen.

As I was lying there, thinking, I realized that it was at this point I truly understood the joyful anticipation that the writers of the New Testament experienced. Jesus Christ had promised to return, and soon. How great that joyful day would be! But each day, each year, there was the thought: there’s always tomorrow. One day we will experience the reality that there is no more tomorrow, and our joy will be complete.

With our eschatological hope, we know that there’s not just a chance. It’s a matter not of if Christ will return, but when. And that is something that I feel overjoyed about and also terrified. What does it mean to say Christ will return? The world will be not just a different place–a changed place–it will be made anew.

I just re-read a blog post I wrote back in 2012 entitled “The Eschatology of a Cubs Fan.” In that post, I wrote:

I still hold out hope though, it’s almost like an eschatological promise: “There’s always next year.” Boy, we’ve been saying that for a long time. But I really do believe it: one day, the Cubs will win one, and it will be during my lifetime. When they do, I’ll be like the fan standing up, looking at the skyline, and just rejoicing. I’ll say “This one was for you, grandpa” and I’ll see him sweeping the streets in heaven [my grandpa would get a broom out and sweep the floors when the Cubs swept a series]. If it happens, I will get to Chicago, I don’t care when it is or how it happens. I won’t have to be at a game, or even there while one happens, but I’ll get back to Chi-town, the place I love, and I’ll kiss the walls of Wrigley, wearing my “World Series Champions” hat.

That day has come. I can’t believe it. I will write up a lengthy reflection on the win later, but for now I want to put it in perspective of this post. The consummation of so much hope, so many shattered dreams that suddenly got repaired, is one of the greatest feelings I’ve had in my entire life. But this is nothing to compare to that which will come at the final eschaton–the return of Jesus Christ. That’s not to say the World Series win for the Cubs doesn’t matter–far from it, the world really did change, and it feels new as I wake up each morning. What I’m saying, instead, is that this feeling, this joy, is one of the ways God gives us to see a greater thing to come. It’s a kind of typology, but one that can be found in the mundane–even something as simple as a human swinging a stick at a ball.

And that, really, is what Christianity (and, really, Lutheranism) is all about. Christ has come into this world, become incarnate, and is in this world now. Our God came and dwelt among us. And those blessings given us reflect God’s good reality, and a better one that is to come.

I think it is true that I, and many other Cubs fans, can now say we know what a slice of heaven looks like, what it feels like. Hope will one day be fulfilled. That long-awaited day shall come. Christ will return. Come quickly, Lord Jesus. Amen.

Eclectic Theist– Check out my other blog for my writings on science fiction, sports, history, movies, and more!

2 thoughts on “Life as a Cubs Fan – Eschatology Fulfilled”