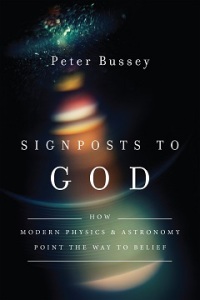 Signposts to God by Peter Bussey is an introductory apologetics book written by a particle physicist. It surveys specifically the fields of physics and astronomy to argue that these fields “point the way to belief.”

The first question–and a fair one–that needs to be asked about this book is this: “Why another introductory apologetics book?” There are so many introductory books on the market at this point that it seems kind of pointless to have another one. But seeing Signposts to God as merely an introductory apologetics book would be to do it injustice. Unlike some of the better known works in this area, Bussey’s work is not merely a series of the most popular arguments for theism with an argument for the resurrection thrown in point to Christianity. Bussey’s approach features a rather robust look at modern physics and astronomy before diving into two primary arguments: the argument from cosmological design (teleological argument) and the argument from first cause (cosmological argument). Thus, Bussey’s book has a narrower focus than many introductory books, which means that it ultimately gives readers a better working knowledge of the lofty topics it contains.

Bussey’s intriguing approach of introducing readers to some basics of astronomy and physics before diving in means that readers will be better able to articulate their own beliefs while also interacting with criticisms more easily. There’s a great difficulty in apologetics-circles, I think, of people thinking that reading one book will be enough to make them an expert and able to answer every argument ever put forward against Christianity. This is definitely not the case, and Bussey’s humble approach speaks volumes to this.

Illustrative of Bussey’s approach is his brief mention of the biological design argument (often referred to as Intelligent Design or something similar). He notes that it can be intuitively clear that a natural path to some feature seems impossible, but that time and again such intuitions seem  to be proven wrong. Thus, he doesn’t outright reject such forms of apologetics, but rather urges a word of caution when trying to use one specific feature of one specific creature to point to a designer. Moreover, he ties this thought back into the argument he does make from the design of the universe as a whole to show that the latter does not face the same possibly mistaken conclusions.

The man problem with the book, I think, is that there are no charts or graphics to speak of. While certainly not a requirement, they would have been helpful in explaining some of the concepts Bussey is trying to introduce. Of course, I suspect not having so many graphics was a conscious choice on the part of the author to prevent readers from being distracted or misled by such illustrations. Nonetheless, I thought it was worth mentioning.

It’s hard not to say that Signposts to God feels in some ways like just another introductory apologetics book. However, the distinctives that have been noted above help to set it apart from the pack as a fresh take on some of the questions that have been asked many times. Readers looking for a fairly scientific approach to apologetics by an expert in a relevant field ought to immediately grab it.

-Could use some charts/graphics to help break it up

Disclaimer: I received a copy of the book from the publisher. I was not obligated to provide any specific kind of feedback whatsoever.

J.W. Wartick is a Lutheran, feminist, Christ-follower. A Science Fiction snob, Bonhoeffer fan, Paleontology fanboy and RPG nerd.
View all posts by J.W. Wartick »
« Perspicuity of Scripture in the Lutheran Reformers: Reformation 500
The Ontological Argument and an Evil god »

2 thoughts on “Book Review: “Signposts to God” by Peter Bussey”