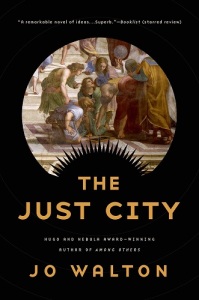 Jo Walton’s The Just City is unlike anything I’ve read before. She seamlessly combined philosophy, theology, and fantasy into an epic tale that was difficult to put down. The plot is centered around the notion that Apollo and Athene, the Greek gods, decide to go through time and collect people who desired to attempt to build Plato’s Republic. Here, we’ll examine the book from a worldview perspective. There will be SPOILERS in what follows.

One scene features Maia speaking with Ikaros, a man who had embraced various aspects of the Republic with fervor. Maia believes that Ikaros was a Dominican monk in his former life, but she finds that he is quick to exclude Christianity from the bounds of possibility in the City. The reason is because he doesn’t believe Christianity to be true, or at least any aspect of truth capable of matching their new perspective:

[Ikaros reasons:] “I reconciled Christianity, Islam, Judaism, Platonism, and Zoroastrianism… But don’t you see, we were doing it starting from a belief that Christianity was true. If instead it’s the Greek Gods who are true… then what price salvation? They can mix from the other side, we could say that Plato was really talking about God. But from this side [believing the Greek Gods], well, we can’t see that when Jesus said he’d be in his father’s house that he was really talking about Zeus, now can we?” (88)

Ironically and horribly, after having this conversation about how Christian morality is not Truth and also needlessly complex, Ikaros rapes Maia. He reasons that they are allowed to have eros love without obligations required by Christian morality, and he mocks her adherence to Christianity.

In the world of The Just City, the Greek gods are very real and active. What might this suggest about Christianity and other faiths? We’ve already seen how one character argues that introducing Christian morality would have been unnecessary. But what of Christianity itself?

Apollo is incarnate within the City and only a few know who he actually is. He has a discussion with Sokrates (Socrates) and Simmea regarding souls and gods. We’ll pick up his commentary at “the good part”:

Many circles [of divinities] is right; all human cultures have their own appropriate gods. But the only thing on top is Father. It isn’t a set of concentric rings… [the one Apollo is correcting] thought of it as a hierarchy with divinities subordinated to others. It isn’t like that at all. It’s a set of circles of gods pretty much equal to each other but with different responsibilities, and linked by Father.” (285)

When he is specifically asked about Jesus and Mary, etc., Apollo states:

Such a view of course is just as fantastical as the book itself is. The attempt to mash all religions together into one amalgam centered around a divine being not only does injustice to those faiths which have no divine being, but also to those that do. The latter would have to effectively shed all pretext of having truth claims about reality, as I’ve argued elsewhere.

It will be interesting to see in the next two books of this trilogy who the “Father” turns out to be and how the attempt to reconcile different faiths plays out, but at this point it is fairly obvious that it will play out in a way that Christians and believers of other faith traditions could not endorse.

Maia, a woman from the 19th century, finds that the options she has ahead of her in her own time are quite bleak. She loves scholarship, but has no way to pursue it. In the introduction to her character we find that she longs for a God that is not limited by masculine concepts of divinity. We can take this as a challenge to ourselves to not make God into a gendered being (apart from the gender of the man Jesus Christ).

There are several explicit scenes in the book, and these tie into the themes it is exploring with gender. The scenes largely center around the issues of power that come into sex. Thus, the aforementioned rape of Maia by Ikaros. Apollo himself is trying to figure out why Daphne preferred to turn into a tree rather than “mate” with him (aka be raped by him). Apart from the obvious (this book is not for children or even young adults), we find that preconceptions about gender and power are challenged throughout. Women say no, and mean it (shocking, right? [sarcasm]); men begin to discover that the actions they take are often sexist; beliefs that women are incapable of philosophizing are challenged.

The Just City turns out to be as much about injustice as it is about justice. In a way, we may think of this as what would inevitably happen whenever imperfect beings attempt to create true justice on their own: they fail, often miserably. It will be interesting to see what happens with the “circles” of deity that Walton has come up with to try to integrate divergent and differing worldviews into one. Including such discussions of course makes the book stand firmly against Christian orthodoxy; but the context these challenges are set in makes it worthwhile to offer counter-arguments to the sections that are objectionable. It can, in a way, be practice for critically examining one’s own beliefs.

Whatever the case, for now we find that the “Just City” is not.

Read through my other posts on popular books here (scroll down for more).

One thought on “The (Un)Just City- Jo Walton’s “The Just City,” Gender, Gods, and Morality”