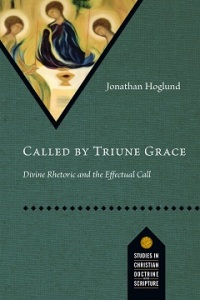 The notion of an “effectual call”- the notion that God’s call is itself that which brings about salvation, apart from human action – is theologically controversial and has been at the focus of many intra- and extra-Protestant debates since the Reformation. Jonathan Hoglund in Called by Triune Grace approaches the topic from the notion of divine rhetoric–persuasive communication–and argues that such a perspective helps to make sense of the idea of effectual calling.

Hoglund approaches the issues from a perspective that should be interesting to readers on either side of the debate about effectual call. He spends little time trying to persuade readers that “effectual call” is itself a valid category, instead focusing on the impact of and means for God performing such an effectual call. Ultimately, he settles upon divine rhetoric as this means. Divine rhetoric–not just the Bible itself but in the stories within the Bible, and the Holy Spirit’s working–provides the means by which an effectual call may be issued. Issues of language, speech-act theory, and more are raised and discussed, often with intriguing results.

Throughout the text, he appeals to numerous biblical texts to expand on his points, often highlighting aspects that may be overlooked.

Particularly insightful is Hoglund’s appeal to writers outside specifically conservative Calvinist traditions. Along the way, he engages with Luther, Wesley (briefly), Francis Pieper (Lutheran), Barth, N.T. Wright, and more. It is refreshing to see such engagement, particularly in a topic that tends to be seen by many evangelicals as the sole domain of Calvinists. In fact, the Lutheran tradition and some streams of Anglicanism and others have much to say regarding monergism and the effectual call. Seeing such contributions and thoughts acknowledged and engaged with was great.

If there is a downside to the book, it is that because Hoglund focuses so specifically on the notion of divine rhetoric, it seems he may miss out on other aspects of the effectual call. Though he does acknowledge other perspectives, the highly-focused nature of the book leaves little time for engaging other possibilities.

Called by Triune Grace is a fascinating, deep look at the notion of an effectual call. For those interested in this topic, no matter what their perspective, it comes highly recommended.

-Perhaps too narrowly focuses the means of the divine call

One thought on “Book Review: “Called by Triune Grace: Divine Rhetoric and the Effectual Call” by Jonathan Hoglund”