Book Review: “A History of Western Philosophy From the Pre-Socratics to Postmodernism” by C. Stephen Evans 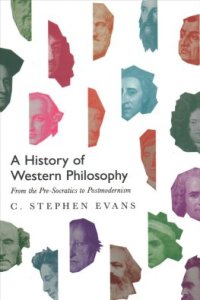 A History of Western Philosophy from the Pre-Socratics to Postmodernism by C. Stephen Evans is a valuable entry in the list of single-volume histories of philosophy. Evans approaches the topic from a Christian perspective, though he does integrate critiques into the exposition of philosophies as he goes. Instead, he offers a perspective in the end of philosophers with which he has significant disagreements.

It would be impossible to summarize the whole work here. Instead, I’ll offer a few highlights. In addition to the introduction and concluding summary, there are 22 chapters focusing on either individual philosophers (eg. Aquinas, David Hume) or movements (eg. Enlightenment Deism, Early Christian Thought). Evans writes in a truly winsome and interesting manner, and his explanation of each philosophy is written in a way that, initially at least, draws the reader into thinking it may be “the” philosophy. When Evans believes there is important criticism to offer, he generally does so at the end of each chapter. When other philosophers have offered significant critiques, Evans incorporates those into the chapter. One example of the latter is the Ontological Argument of Anselm, which receives attention in several different chapters (for example in the chapters on Kant, Early Medieval Philosophy, The High Middle Ages (I) and (II)) with major philosophers either arguing against it or making improvements.

I particularly enjoyed those philosophies which at points seemed unanswerable. For example, George Berkeley’s immaterialism caught my interest when I first got into philosophy, and the puzzle of his thought remains one that intrigues me. As Evans aptly sums it up: “Few people find Berkeley’s arguments convincing. Nevertheless, it is very difficult to see just what is wrong with the arguments” (333). Indeed! Yet, as Evans notes, Berkeley’s arguments just ring of wrongness somehow. Denying the existence of the material world just seems… off to us. It’s one of those pesky philosophical problems that makes the field so intriguing and frustrating all at once.

The chapter on Hume was of interest as well, though I personally hoped he would bring up George Campbell, a contemporary of Hume whose A Dissertation on Miracles offers a decisive rebuttal to Hume’s arguments on miracles. Nevertheless, this and many other chapters are full of insights and interest. The footnotes offer much by way of further reading, as well.

A few criticism might be leveled at this stage. First, there is a notable lack of women in Evans’s survey. Though he does allude to this and does include one woman philosopher as a title philosopher for a chapter, a ratio of >20:1 is not great. A diversity of voices in this regard might have heightened the usefulness of the book. Another critique to offer would be the rather uncritical acceptance of “Western” as denoting something understood by all. In the introduction, there is a brief look at this topic, but little commentary at all is offered on how one distinguishes “Western” from any other kind of philosophy. As with any broad concept like this, it seems almost too broad to be useful. After all, if people like Augustine from Africa and Clement from Alexandria are “Western,” what does the term mean, exactly? Indeed, included in this definition of “Western” are philosophers from New Zealand and Australia. The term just doesn’t seem helpful to begin with.

The strengths of this volume should now be apparent. It presents a broad look at many of the most famous philosophers (and philosophies) that people run into in the United States. Evans offers critical feedback where appropriate, and he presents each philosophy in an effective, interesting manner.

C. Stephen Evans has done a service making this historical look at philosophy. It is surprisingly readable, while also presenting the views of many philosophers in a fair way.  I recommend A History of Western Philosophy as an introduction to the topic alongside other, firsthand works.