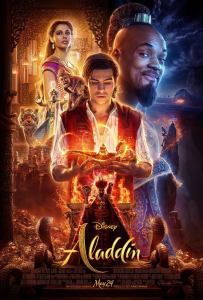 Disney’s “Aladdin” is a remake of a beloved animated classic. The film is a feast for the eyes and ears, with a few tweaks to the original that will be debated by longtime fans. I’d like to offer a reflection on the film from a worldview perspective. There will be SPOILERS, of course.

One of the major themes of Aladdin is that of character. What kind of people are the characters, really? Aladdin at first appears to be nothing but a common criminal, but we quickly find that his thieving is in order to survive. He sings: “Gotta eat to live, gotta steal to eat” and, though the song presents it as a tongue-in-cheek moment (“I steal only what I can’t afford/(That’s everything)”), it already presents viewers with questions about the society in which he lives and the rightness or wrongness of his actions.

Aladdin is then faced with a huge test: what will he do with three wishes that seem to have no limits other than his imagination (or to wish for more wishes, of course)? As his relationship with Jasmine encounters a few lumps, he considers using his last wish to improve his situation even more, going against his promise to the Genie. The Genie, for his part, has acted as a moral compass throughout, asking whether Aladdin really wants to go “that way” and variations on that question multiple times. Aladdin is facing temptation, and he ultimately passes the test. After stopping Jafar, he gives Genie his freedom.

The temptation Aladdin faced was made more acute by his social situation. Coming from utter poverty, he was faced with the choice to descend into decadence and deceit in order to maintain his newfound power or to risk what he’d gained being honest. Of course, it certainly helps that he’d already saved the Kingdom multiple times.

The temptation of Christ in the desert is something I thought of as I reflected on this scene of temptation of Aladdin. In that part of Christ’s life, the deceiver offers Jesus all the power in the world if he will but bend the knee to him. But Jesus rejects this temptation, staying on a path that would ultimately lead to his death for us.

Agrabah is a Kingdom full of injustice. The streets overflow with people in need, and Princess Jasmine is touched by their plight and determined to do something about it. Her exploration of the city is not portrayed in this film as a flight of fancy, trying to escape for a day of adventure from the palace. Instead, Jasmine is trying to determine the state of her people and use that, she hopes, to rule better than she could have otherwise.

The Christian faith makes it absolutely clear that we are to care for the poor. Time and again, Jesus warns about the dangers of wealth and the fact that we cannot serve money and God. Additionally, throughout the Bible demands are made that we care for the poor and the refugee.

Jasmine’s own concern for the poor is a model of character. Placed into a position of great poverty and wealth, she seeks to understand the plight of those who are in need. The movie doesn’t go beyond a resolution that places her as Sultan, though her character leaves us in little doubt over what her actions will be.

Jasmine is also central to the plot in another way: as a challenge to the silencing of marginalized voices and the wielding of authority to do so. She briefly hints at the concept of being told to go “speechless” early in the movie. Both her father and Jafar have repeatedly told her that women are to be silent, seen and not heard. In a climactic scene in which Jafar takes over as Sultan, she erupts into a powerful song that pushes back against this silencing of women that. She sings, in part:

She here makes the decision to speak up, appealing to the guards to push back against blind allegiance to tradition and authority and instead look to standards that go beyond that. Though not made explicit at all, it is clear in this scene that there is a higher standard than that of tradition or the authority vested in a seat like the Sultanate. Her wisdom challenged the tradition to show that it was mistaken.

Too often in our churches, appeals are made to authority or tradition to do the very same thing that Jafar and the Sultan tried to do to Jasmine: silence women. Instead, we are taught that there is “no man and woman” in Christ (Galatians 3:28) and that women were prophets, deacons, and apostles in the church. Like Jasmine, let us raise up women who won’t go speechless so that we can hear their wisdom as they wisely point us towards Christ.

J.W. Wartick has an MA in Christian Apologetics from Biola University. His interests include theology, philosophy of religion--particularly the existence of God--astronomy, biology, archaeology, and sci-fi and fantasy novels.
View all posts by J.W. Wartick »
« Book Review: “A History of Western Philosophy From the Pre-Socratics to Postmodernism” by C. Stephen Evans
Women Prophets, Complementarianism, and Submission »