I have seen multiple complementarians recently on Twitter asserting that women prophets in the Bible were in submission to men; particularly to male teachers who were in the role of what we have turned into the modern pastor. Denny Burk, the current President of the Council for Biblical Manhood and Womanhood, responded to a lengthy series of questions and comments about a post he wrote supporting complementarianism recently. One of the questions was about women who were prophets in the Bible and whether they submitted to men. Burk wrote: 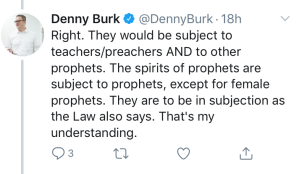 “Right. They [women prophets] would be subject to teachers/preachers AND to other prophets. The spirits of prophets are subject to prophets, except for female prophets. They are to be in subjection, as the Law also says. That’s my understanding.”

Another complementarian, John Carpenter, pastor at a Reformed Church, wrote “…I’m a lax complementarian, believing that women can ‘pray and prophesy’ in church under the authority of all male elders. But I could be wrong. The stricter [complementarians] may be right. I know the egalitarians are wrong.” 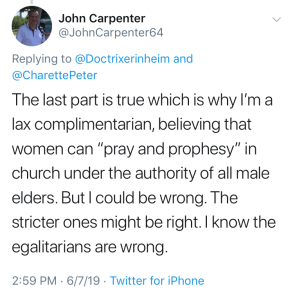 The problem with these and related statements is that they actually directly contradict Scripture. This isn’t an issue of interpretation that allows for disagreement. Instead, complementarians, by asserting that women prophets would explicitly be under teachers in the church, are going directly against the Word of God.

1 Corinthians 12:28 quite clearly states “…God has appointed in the church first apostles, second prophets, third teachers, then miracles, then gifts of healing, helping, administrating, and various kinds of tongues” (ESV).

So in the church, we find that prophets, in fact, rank above teacher/preachers, though Denny Burk, the President of a major evangelical group that promotes complementarianism, says they do not, and that instead “they are to be in subjection as the Law also says.” We might ask Denny Burk where he finds that verse in the “Law.” Which verse in the Hebrew Scriptures state that women prophets are to be in subjection to teachers/preachers? There is none. But not only that, he and other complementarians who make this argument are going against the very Bible they purport to affirm when they hold to complementarianism.

A Brief Biblical Proof for Women Pastors– Read why 1 Corinthians 12:28 is an even bigger problem for complementarians, as it effectively guarantees women may hold the same or more authority than that of pastors.

On the Femnization of the Church– It is frequently alleged that the church is being “feminized” and that this is a bad thing. Check out this post, wherein I analyze this notion from a few different angles.

Women in the Ministry: The philosophy of equality and why complementarianism fails– I argue that the position in which women are excluded from church leadership entails inequality of being.