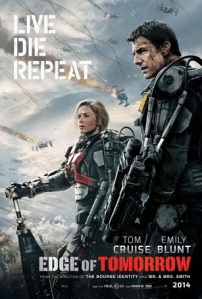 My favorite movie of the year so far.

Each Week on Saturday, I’ll be asking a “Question of the Week.” I’d love your input and discussion! Ask a good question in the comments and it may show up as the next week’s question! I may answer the questions in the comments myself.

I realized recently that I haven’t been to as many movies this year as I went to last year. However, it does seem that the movies I have gone to see have been awesome.  Early in the year I saw the appropriately-timed Frozen, which I felt had some great themes in it to go with its fantastic music. Then, I went with a friend to see “Lone Survivor,” which I am pleased to report showed greater complexity than many war movies or commentary on the war in Iraq. Then, I saw “Captain America: The Winter Soldier,” which may have been the greatest superhero movie other than the Dark Knight trilogy. I loved its moral commentary.

Finally, I went to go see “Edge of Tomorrow” and “X-Men: Days of Future Past” back-to-back last weekend. The X-Men flick was fantastic and brought up, again, questions of morality.  “Edge of Tomorrow,” I would say, is my favorite movie of the pack so far. It was just so good and it helps that it was a genuine sci-fi epic.  “Edge of Tomorrow” brings up a number of topics like sacrifice and choice which aren’t always explored in movies, let alone blockbuster action flicks.

As for the question this week:

What movies have I missed that you would consider a “must see”? Let me know in the comments!

This post was adapted from my “other interests” site, which you may want to check out- Eclectic Theist.

Question of the Week– Check out other questions and give me some answers! 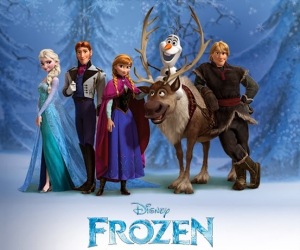 Disney’s “Frozen” has generated quite a bit of buzz, and for good reason. The movie is a feast for the eyes and ears. It’s a delight to watch, and it is filled with interesting thematic elements and humor. Moreover, as a Minnesotan, I feel right at home during this winter. Here, I’ll evaluate the movie from a worldview perspective. There will, of course, be SPOILERS hereafter.

The core of the tension in the movie is found in Elsa’s power. Her parents try to teach her to restrain it, but when put under duress, her power breaks free and she fled the castle. Interestingly, one may note that the total denial of her capability led to her cutting herself off from those who surround her.

Once she leaves the castle, she decides to break free of her self-restraint. The Oscar-nominated song “Let it Go” is indicative of this. Elsa sings:

It is interesting to see that there must be some balance between the two extremes. Elsa’s self-imposed restrictions upon her powers led to the separation from those she loved; her release endangers the entire kingdom. Her life, instead, must be lived along a balance. I can’t help but think of the words of Paul:

Christian freedom is a freedom with restraint. There must be balance in the process of sanctification.

Many have hailed “Frozen” for its portrayal of women. Neither Anna nor Elsa have a relationship foisted upon them for the main purpose of the plot. Anna’s developing relationship with Kristoff is made even more interesting by the contrast to her obsession with Prince Hans. Both women are independent. Some tongue-in-cheek humor could be found in the striking way in which both Kristoff and Elsa noted that Anna’s willingness to marry a man she just met that day was a bit absurd.

The plot is not driven by a love story; instead, it is driven by the need for reconciliation. Powerful, strong women are the ones who push the plot forward, while the men are sometimes helpful and even featuring shades of prince charming (Kristoff) or villainous and greedy (Hans). It is not that the portrayal of men is negative (as I just noted, there is a spectrum of motivations for the men involved); rather, it is that women are not seen as incapable of action. It is refreshing.

Elsa herself, far from being the quintessential villain, is someone with whom we may be capable of sympathizing. Like her, we are in a serious predicament brought about by our own actions: we live in need of aid. Our actions have sometimes horrific consequences. At other times, our consciences convict us of the wrongness of our deeds. We long to sing along with Elsa, crying out to “Let it Go” and stop caring anymore. But, like her, we realize that such a state is ultimately not be lauded but to be feared. We lash out at those we love due to our own guilt. Can there be salvation?

Interestingly, some have argued that the movie actually serves as an allegory of Christ. It is Anna who is wronged by Elsa, but it is only Anna who is able to right the wrong. The person who is wronged is the one who must make it right. Similarly, for the Christian, it is God who is wronged, but God is the only one capable of righting that wrong in the perrson of Christ. (I am here paraphrasing the post I linked to.)

The themes noted above come to fruition here. Our state is characterized by a recognition of the wrongness of our actions, but an incapability of bringing about the reconciliation required. Thus, it is up to the party wronged to bring about this reconciliation, through the true forgiveness offered in Christ.

Disney’s Frozen might be the most Christian movie lately– This post reflects upon the movie as an allegory of Christ. As noted, I derived much of the last section from the argument made in this post.

The Image featured in this post is the intellectual property of Disney. I make no claims to ownership and have used it under fair use for the purpose of critical evaluation of the film. To my knowledge the image is freely available as promotional material.

Another week, another round of great reading served up for you, dear readers. I’m writing this in the midst of getting 4-6 inches of snow (it’s already at 3, and not showing signs of slowing…), so I can’t help but feel a little bit like throwing in a Christmas movie today and sipping some cocoa. Oh well! It also made me think of the movie “Frozen.” The topics this week are Disney’s “Frozen,” the conversion story of a French atheist, “Street Epistemology,” the sign of Jonah and world religions, something we can learn from atheists in the “Bible Belt,” and evangelicalism and liturgy.

Disney’s “Frozen” might be the most Christian movie lately– I found this article on the movie “Frozen” to be quite insightful and interesting. I highly recommend the movie as well as this article.

How God turns a French  atheist into a Christian theologian– I found this conversion story simply fascinating for how God works in people’s lives. The insights from this theologian are profound, and they speak volumes for the importance of a reasoned faith.

Bible Belt Bubble Burst? Wisdom from an atheist friend– The importance of a reasoned faith is shared eloquently here through reflection on a conversation with an atheist friend in the “Bible Belt” of the United States. Highly relevant.

The Sign of Jonah– Winfried Corduan is a major scholar of world religions. In this blog post, he offers up a video of how world religions are impacting the United States alongside a commentary on the “Sign of Jonah” which Jesus says will be given to his contemporaries.